The Birthplace of the Republican Party 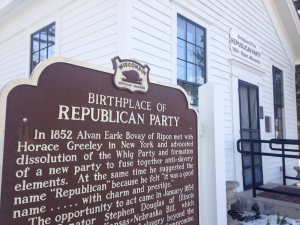 It began in a little schoolhouse in Ripon, Wisconsin, in 1854.  A small group of dedicated abolitionists gathered to fight the expansion of slavery, and they gave birth to a Party dedicated to freedom and equal opportunity.

The name “Republican” was chosen, alluding to Thomas Jefferson’s Democratic-Republican Party and conveying a commitment to the inalienable rights of life, liberty, and the pursuit of happiness.

The Party was formally organized in July, 1854 by thousands of anti-slavery activists at a convention in Jackson, Michigan. And it was no accident that two years later, in 1856, the first Republican National Convention took place in Philadelphia, where the Constitution was written.  In 1860, Abraham Lincoln was elected the first Republican President of the United States of America!